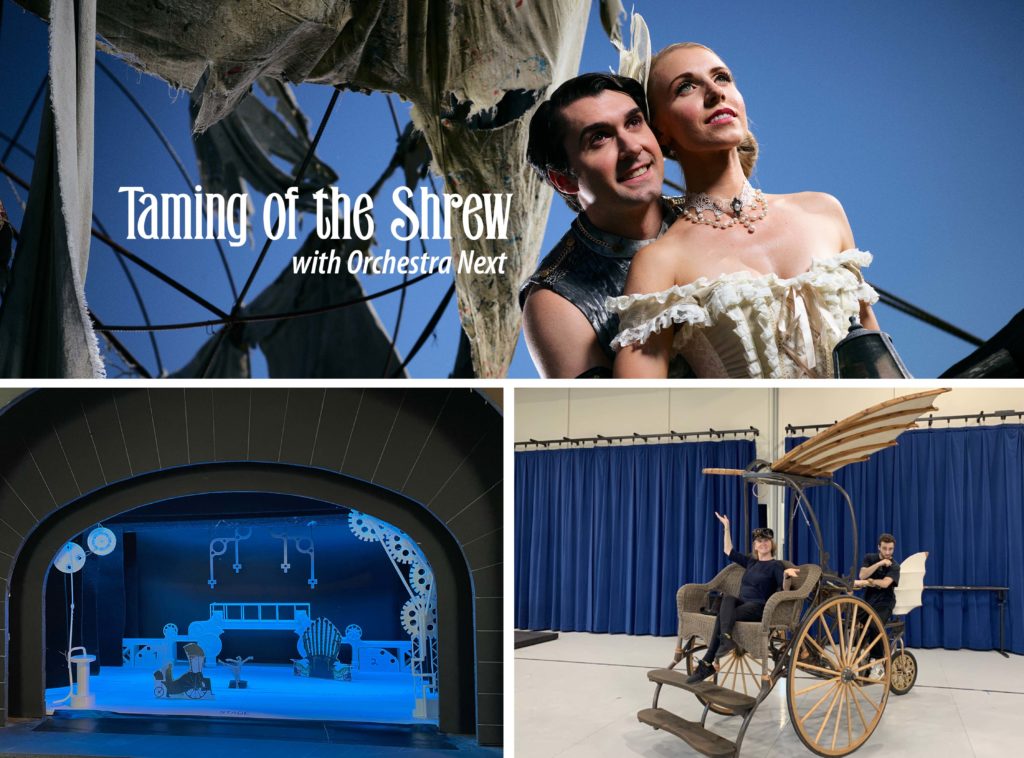 The pandemic’s silver lining was the extended development time Artistic Director Toni Pimble enjoyed creating her latest full length ballet, Taming of the Shrew, opening this weekend at the Hult Center for the Performing Arts. Originally set to premiere in April of 2021, the results are nothing less than amazing: a full length two-act (42 scenes) ballet with three extended pas de deux, set in the 19th century’s steampunk era; more than 60 steampunk-inspired costumes; three gigantic fantastical mobile steampunk machines; an enormous set of otherworldly machinations that magically morph and mutate before your very eyes; and a female composer’s score, rarely, if ever, heard before in the Pacific Northwest and played by Orchestra Next. (Learn more about composer Louise Farrenc on Orchestra Next’s podcast HERE.)

The sheer amount of work involved in the ballet’s costume design and production—one of Pimble’s labors of love outside of choreography—alone is staggering. From sourcing fabrics as far away as New York City’s famous fabric mecca, Mood, to gathering endless quantities of tiny steampunk findings and accessories, every dancer will be exquisitely dressed. Katherine, (Danielle Tolmie) will have five costume changes over the two acts. “The brocades we found at Mood, absolutely gorgeous I might add, are from all over the world,” Pimble explained.

On set, we’re simply agog about the three steampunk machines created by Joe Mross and his team at Archive Designs, all playing important roles in the ballet. The largest of the three, Odenhamer’s Accordilodeon Mobilis, a four-piloted mobile pipe organ carriage where Bianca (Sarah Kosterman) takes her music lessons, was previewed in the Hult Center Lobby last month. Mross has created movable pipes and a panoply of quirkily named organ “stops,”from “Floydian Slips” to instruments from the band at Mos Eisley’s Star Wars cantina. At his Eugene fabrication shop, Mross builds an array of functional to sculptural metal works, including his 2014 contribution to Burning Man, the 5,000 pound Teluriz (Lost Nomads of Vulcania). (See the Teluriz and read more on page 32 of our Season Program Book HERE.) 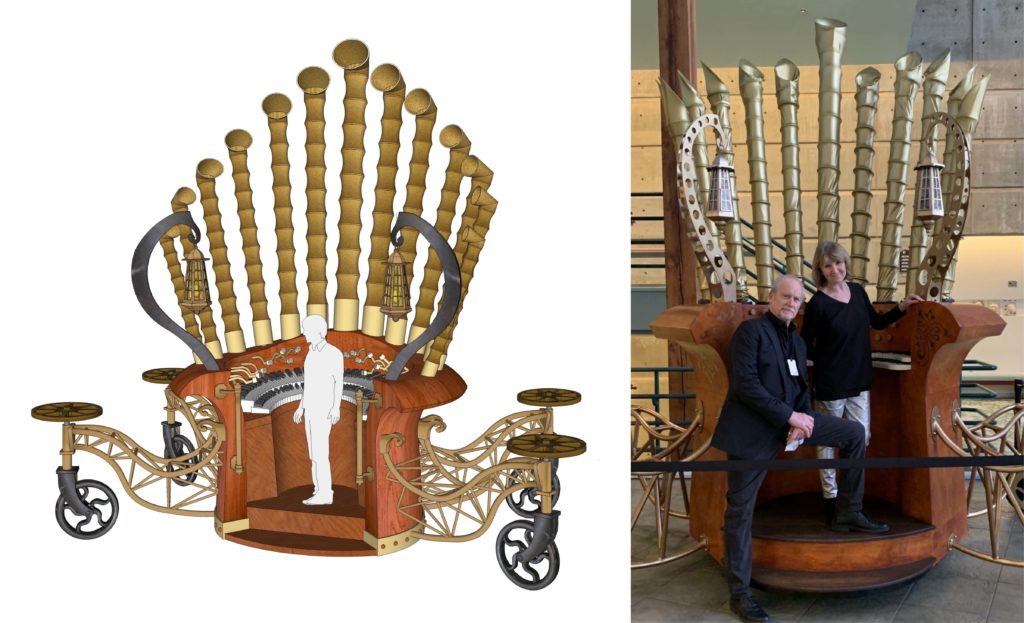 Petruchio’s (Mark Tucker) flying tricycle, Von Odenhamer’s Ornithopter Diomedea—inspired by a steampunk helicopter on Mross’ property that Pimble spied during a 2019 promotional photo shoot—is the second mobile piece by Mross. Upcycled and handcrafted with authentic wagon wheels by Hansen Wheel & Wagon Shop, the Ornithopter whirls across the stage with its licensed driver, Grumio (Alessandro Angelini), and passengers. Still in fabrication last week, the Mad Scientist Boiler Oven, is the third piece to join the Shrew set.

This week, as the dancers and crew take to the Hult Center for onstage rehearsals, the Shrew set will be constructed in whole for the very first time. Architect and set designer Paul Dustrud (and Pimble’s husband) not only designed and created the usual renderings and mechanical drawings, he crafted a miniature version of the Silva Concert Hall stage complete with 3D printed scale models of every set piece. Pimble has used the mini set to work through the choreography and the numerous mobile set changes. 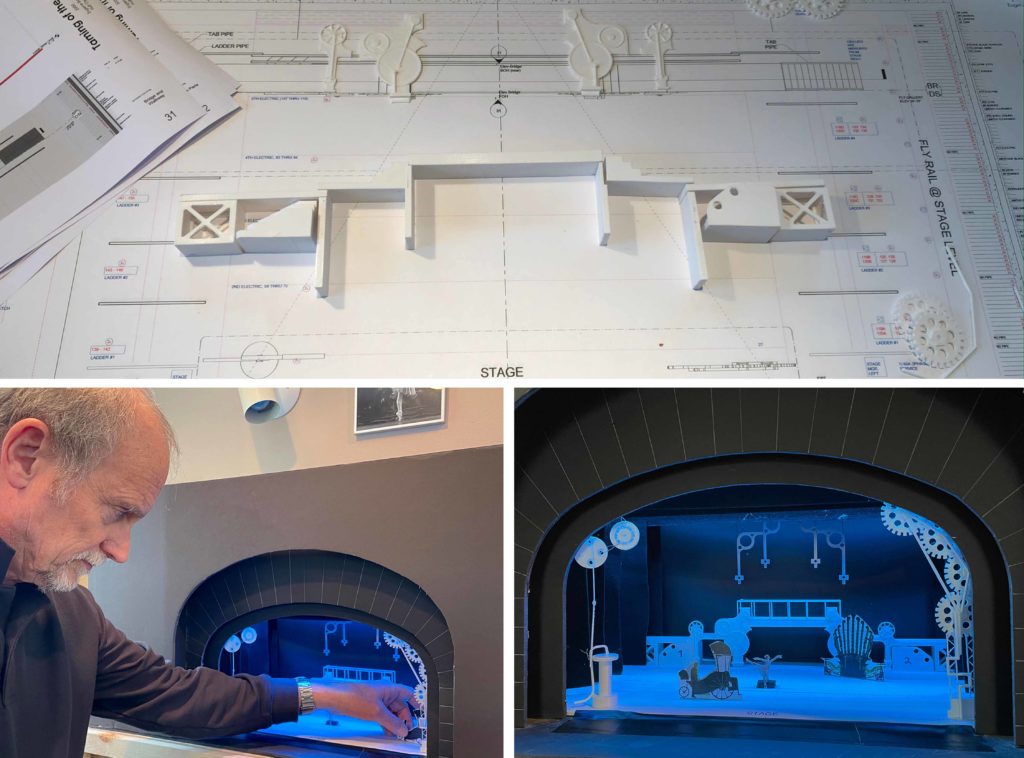 Dustrud also upcycled materials in his set design and collaborated extensively with Michael Briley and Eärendil Biskup, EB’s Technical Director and Assistant Technical Director, in fabricating the pieces. Biskup noted that the set’s most challenging part was “its sheer size and the limitations of the shop. We weren’t able to fully assemble it in the shop or even stand up certain elements.” She added, “The level of creative collaboration involved in building Taming of the Shrew has made it one of the most rewarding projects I have worked on.” (Read more from Briley and Biskup in the Taming of the Shrew Performance Insert HERE.) Each cog, gear, rivet, and every carefully placed patina and rusted finish has been crafted with the care and conviction of these long-time EB crew members.

Modern technology will play a small yet significant role in the ballet, even with a decidedly steampunk stamp. Quotes attributed to “Shakespeare” will appear above the stage as we’re asked to consider that the bard may have actually been a woman. And at the ballet’s closing, as the battle of the sexes rages on, more timeless quotes appear that may leave you pondering the possibility.

By Jerril L. Nilson, Eugene Ballet Board of Directors