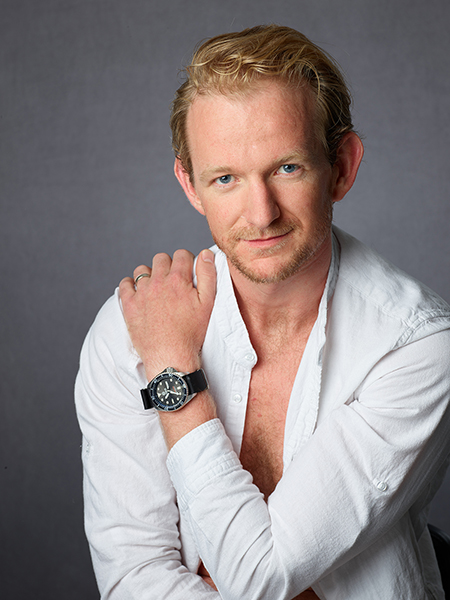 Mark Tucker is honored to be taking part in his 15th season with Eugene Ballet. Mark began his training in his home state of Hawaii. As well as continuing his training in Miami, Houston, and Washington DC, Mark attended The North Carolina School of the Arts where he graduated high school and obtained a BFA in Classical Ballet with a minor in Modern Dance. Mark joined Eugene Ballet in 2008 and was promoted to Principal Dancer in 2015. Over the course of his career, Mark has had the opportunity to dance an expanding range of roles with choreographers and directors, internationally and from across the country. Edwaard Liang’s Age of Innocence, Septime Webre’s Alice in Wonderland, Mauricio Wainrot’s Anne Frank, Val Caniparoli’s Tutto Eccetto il Lavandino, Salvatore Aiello’s Journey, Head Wrangler in Agnes De Mille’s Rodeo, Heather Maloy’s Stranger, as well as works by Jessica Lang, Amy Seiwert, Stephanie Martinez, Devon Carney, Victoria Morgan, Stanton Welch, and EB’s Suzanne Haag to name a few. In 2017, as a guest artist with Ballet Hawaii, he was featured as Waltz Boy in George Balanchine’s Serenade.

Mark began dancing lead roles with EB in 2012 as the head male in Rite of Spring with, now Associate Artistic Director Jennifer Martin. He has been featured as the lead male in Gerald Arpino’s Light Rain and more recently premiered the role of Fear in Haag’s The Firebird. Mark has defined his career as a strong partner and has had the opportunity to be a part of the creation of some of Toni Pimble’s more modern ballet’s including Dark Side of The Moon and “I Want You” in Pimble’s All You Need is Love. He also enjoys bringing characters to life onstage in roles such as Lord Capulet in Romeo and Juliet, Von Rothbart in Swan Lake, and the sultan in  Scheherazade. In 2022 Mark starred alongside his wife, Principal Dancer Danielle Tolmie, in Pimble’s Taming of The Shrew. “Dancing the role of Petruchio was a challenge both physically and mentally. He truly changes throughout his narrative arc and pushes the boundaries of some uncomfortable subjects.” He added, “The only thing that may beat that was dancing Siegfried across Danielle while she was pregnant with Luca. He was moving around like crazy during Black Swan.” In the 2022/23 Season Mark looks forward to being a part of Pimble’s Rite of Spring and celebrating his son Luca’s third birthday. Follow him and Danielle on Instagram @markdani8688