Eugene Ballet founded with an opening performance of The Soldier’s Tale with the Pacific Players.

First of three international tours to Taiwan performing in Taipei and seven other cities in Taiwan.

Collaboration with Ballet Oregon presenting Giselle in Portland at the Civic Theater and Eugene at the Hult Center with guest artists Kimberley Glasco and Fernando Bujones.

Celebration of the Uncommon Woman performance – evening of all women choreographers and composers conducted by Marin Alsop.

EBC receives the Governors Arts Awards for Excellence in the Arts.

2017
The Snow Queen premiere with full length composition by composer Kenji Bunch performed live by Orchestra Next and supported by Richard Haugland. 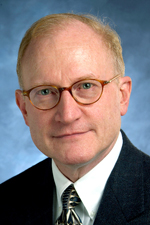 A native of the Pacific Northwest, Mr. Grannan began his ballet career studying with Doreen Gilday in Eugene and earned a Bachelor of Fine Arts degree at the School of Performing Arts at United States International University in San Diego. Mr. Grannan’s professional career took him to Germany, performing with several ballet companies, touring throughout Europe, in leading roles in both classical and contemporary ballets by noted choreographers.

In 1978, Mr. Grannan to co-founded the Eugene Ballet Company with Artistic Director Toni Pimble. Since becoming Managing Director in 1987, Mr. Grannan has facilitated the Eugene seasons as well as the domestic and international tours.

As a performer with the Eugene Ballet Company, Mr. Grannan created several roles including Katschei in The Firebird, and the Step Sister in Cinderella, among others.

In 1997, he and Toni Pimble were recipients of the Governor’s Arts Award for their work in developing performance and educational programs with the Eugene Ballet Company, the first received by a dance organization in Oregon.

Under Mr. Grannan and Artistic Director Toni Pimble’s leadership, Eugene Ballet receives support from the National Endowment for the Arts. Also, the EBC was the first Oregon company to be chosen to take part in the NEA’s Advancement program and was the only ballet company in the nation to participate in the two-month-long, NEA-sponsored “Dance On Tour” programs taking place in rural communities in Arizona and New Mexico. Mr. Grannan helped to facilitate a three year composer in residence for the ballet through Meet The Composer “New Residencies” program.

Mr. Grannan has served on three separate Western States Arts Federation (WESTAF) dance touring panels, the National Endowment for the Arts “Creation and Presentation” panel, as well as selection panels for Arts Northwest and the Individual Artist Fellowship and Theatre panels in Oregon and Idaho.