Artistic director Toni Pimble’s new ballet, with music by Portland-based composer Kenji Bunch and performed by Orchestra Next, is set in a wintry land ruled by the Snow Queen, danced by Danielle Tolmie.

“She doesn’t really have a heart, she’s very self-centered and can’t see anything else but her wants and her desires,” Tolmie said.

As dancers, every company member is trained to do one’s own stage makeup, but sometimes, with character roles such as the Snow Queen, it can be challenging. 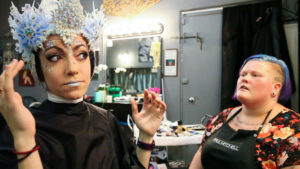 At first, Tolmie and others went with a look that was very pale. They soon decided, though, that the white makeup was not right for the ­hauntingly beautiful Snow Queen.

“In the story of ‘The Snow Queen,’ it keeps saying how beautiful the Snow Queen is — she’s not some ugly wicked witch,” Tolmie said. “We wanted to do something to enhance my beauty rather than taking it away.”

The company reached out to Allen, who is an artist across various ­platforms and has been doing makeup for the past 15 years.

Allen said she was inspired by other female villains such as Angelina Jolie’s version of Maleficent.

“What’s scary about bad guys is when they look appealing — in (the ballet), the male lead is enchanted by her beauty, he can’t stop looking at her,” Allen said. “That’s part of that power, that she’s beautiful but sinister.”

Allen was inspired by the beautiful, iridescent quality of the aurora ­borealis and used those colors as her palette when building Tolmie’s look. Allen contoured her face with greens and blues instead of skin tones and added sequins and glitter to bring different reflective elements to her face — all while keeping in mind how the makeup would work throughout the performance. 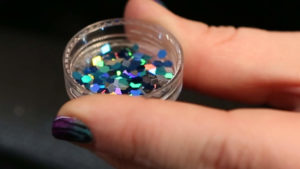 “You’re dancing and sweating, there’s lot of athleticism,” Allen said. “You can’t just look beautiful: It has to be functional.”

“It made it so much easier for me to go home and recreate this,” Tolmie said.

Now, Tolmie said she feels more confident in assuming the role of the powerful and enchanting character.

“When you feel your best, you dance your best,” she said. “(Allen) made this ­amazing look that ­everyone is really happy with  …  and makes me feel ­beautiful.”

Allen said she is taking her whole family to go see her work in motion.

“When you look at photos, it’s never as satisfying as seeing it in person,” she said. “I’m so happy I get to go to this ballet and see these beautiful dancers fantasy world I helped create.”

Article originally posted on The Register-Guard