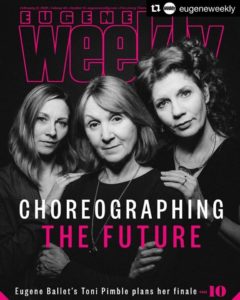 Where others have stumbled, Eugene Ballet takes a lighter approach to the challenge of succession
By Bob Keefer

Four decades ago, Toni Pimble came to Eugene with her then-husband, Riley Grannan, to start a ballet company. It was the 1970s, a time when Eugene was full of hope and aspiration. Lifemagazine had named the city one of the most livable in the country, and arts and culture organizations were sprouting like dandelions.

Founded in 1978, Eugene Ballet Company (EBC) has toured in 32 U.S. states as well as making trips abroad to Japan, Taiwan, India, Sri Lanka, Bangladesh, Syria, Jordan and Tunisia. It’s one of the best-known small professional ballet companies in the country.

Now Pimble, 65, is looking to retire.

That means the ballet faces one of the most difficult challenges of any organization: How do you replace the founder?

Here and elsewhere, arts groups have struggled with that problem. Among the least successful locally is the Oregon Bach Festival, which has been plagued with succession problems for more than a decade as it’s tried to replace its two founders.

Pimble is taking a completely different approach. Instead of doing a national search for a new artistic director who would replace her when she walks out the door, Pimble has planned a slow-motion retirement that will see her backing away from the demands of her job and handing control over to two long-time company members over the next five years.