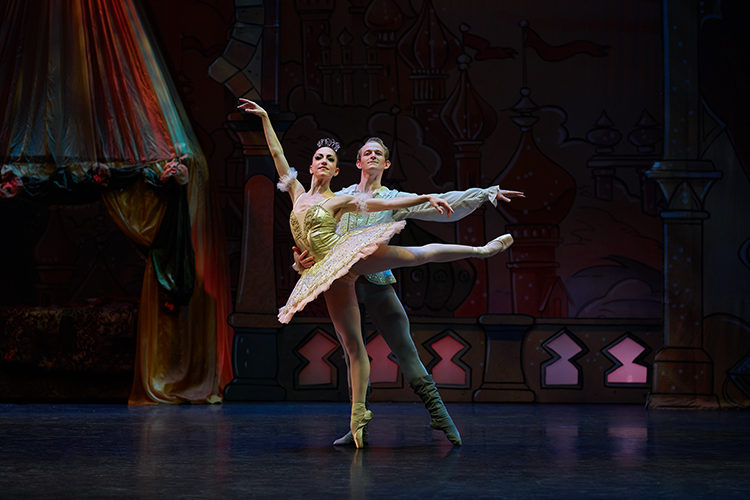 Magic is in the details for Eugene Ballet’s ‘Nutcracker’

The holiday classic runs Friday through Sunday at the Hult Center

Eugene Ballet has traded in its horse-drawn sleigh for a hot air balloon and pirouetting snowflakes for skating ballerinas in its current iteration of the Christmas classic ballet, “The Nutcracker.”

These are just a few of the nuances artistic director and choreographer Toni Pimble weaves into the Eugene Ballet’s detail-rich performance. The two-act ballet was adapted from E.T.A. Hoffmann’s story “The Nutcracker and the Mouse King,” and was originally choreographed by Marius Petipa and Lev Ivanov with a score by Pyotr Ilyich Tchaikovsky. “The Nutcracker” premiered in Moscow, Russia in 1892 and made its way to the U.S. by 1944, becoming a holiday staple for families across the country by the ’60s.

“It has a very family-friendly look,” Pimble said of the Eugene Ballet’s version. “It’s very charming. It’s very colorful. The sets have a lot of color and whimsy in them.”

The story is a coming of age Christmas Eve tale that centers on Clara, a young girl who is given a nutcracker toy by her uncle, the toy maker Drosselmeyer. Christmas magic ensues when she subsequently falls asleep and her nightmarish dream becomes one of magic, fantasy and love as she and her nutcracker-prince are transported to the Snow Kingdom and the Land of Sweets.

But Pimble’s version has a few tweaks.

“It becomes, in part, a little love story — a young love story,” Pimble said. “Clara is, you could say, in love with a young man, Hans, who works for Drosselmeyer.”

In Clara’s dream, the nutcracker transforms into Hans instead of a prince, and he takes her on a fantastical journey.

Click here to read more about Eugene Ballet’s The Nutcracker via The Register-Guard.

Next weekend, Eugene Ballet Company premiers a work years in the making. It’s a new adaptation…