When Eugene Ballet’s The Firebird opened the Hult Center for the Performing Arts in 1982, it had all the elements of the classic Russian fairy tale, with co-founders Riley Grannan and Toni Pimble starring in the production. For the 2019 version, a world premiere, Resident Choreographer Suzanne Haag propels the ballet into a futuristic, post-apocalyptic retelling featuring contemporary choreography.

“I’m really interested in post-apocalyptic stories, books, and art,” Haag said. “The way society in general is right now, I felt that setting would be relatable to the magical elements of the story as well as the current cultural obsession with dystopia.”

When Pimble first approached Haag two years ago about creating her own version of The Firebird, Haag instantly agreed. Pimble told Haag she wanted Haag’s version to be completely different from Pimble’s classic work.

“My first thought was to change the main characters,” Haag said.

And change them she did.

The main character in the story, the Firebird herself, is typically performed by a single female dancer. In Pimble’s version, the Firebird is clad in a fiery red unitard with an ornate, feathered headpiece. Haag’s version features three dancers—two men and one woman—dancing the role of the Firebird.

The Firebird premiered in Paris in 1910 and was composed by Russian composer Igor Stravinsky based on a series of stories and poems. In the tale, a prince wanders into the forest and discovers the Firebird. He tries to capture her, but she convinces him to let her go. Her promise to help him if he’s ever in need is symbolized by the gift of a single red feather.

“Because the Prince and the Firebird partner, and they are typically a man and a woman, their relationship can feel romantic at times, but it’s definitely not,” Haag said of her motivation to create the Firebird character from three dancers.

“Three people working together is more challenging because partnering is mainly learned between two people, but these three dancers have been incredible to work with,” Haag said.

While the ballet’s premiere was still many months away, Haag had to arrange a setting and costumes for a photo shoot that would promote the production. A setting for a post-apocalyptic ballet was not easy to come by.

“We started looking for a metallic, rundown building in the area,” Haag said. “The EWEB Steamplant ended up being the perfect location because it had so many great geographic lines and had clearly sat unused for a long time.”

While traditional productions of The Firebird feature specific characters in gender stereotypes, Haag wanted to go in a different direction. Haag’s Prince Ivan is simply titled “Hero.” Instead of heading into the forest to fall in love with a princess, from the beginning Hero is accompanied by his partner, titled only as “Love.”

The evil Koschei the Immortal from the original tale becomes simply “Fear.” Where Koschei captured princesses with his gang of men, Fear’s rule is over a community of men and woman known as “Us.”

These reimagined characters are brought to life with vibrant and fresh costumes by San Francisco-based designer Susan Roemer of S-Curve Apparel & Design, and theatrical make-up design by Roxy Allen, stylist and aesthetician from Springfield, OR. 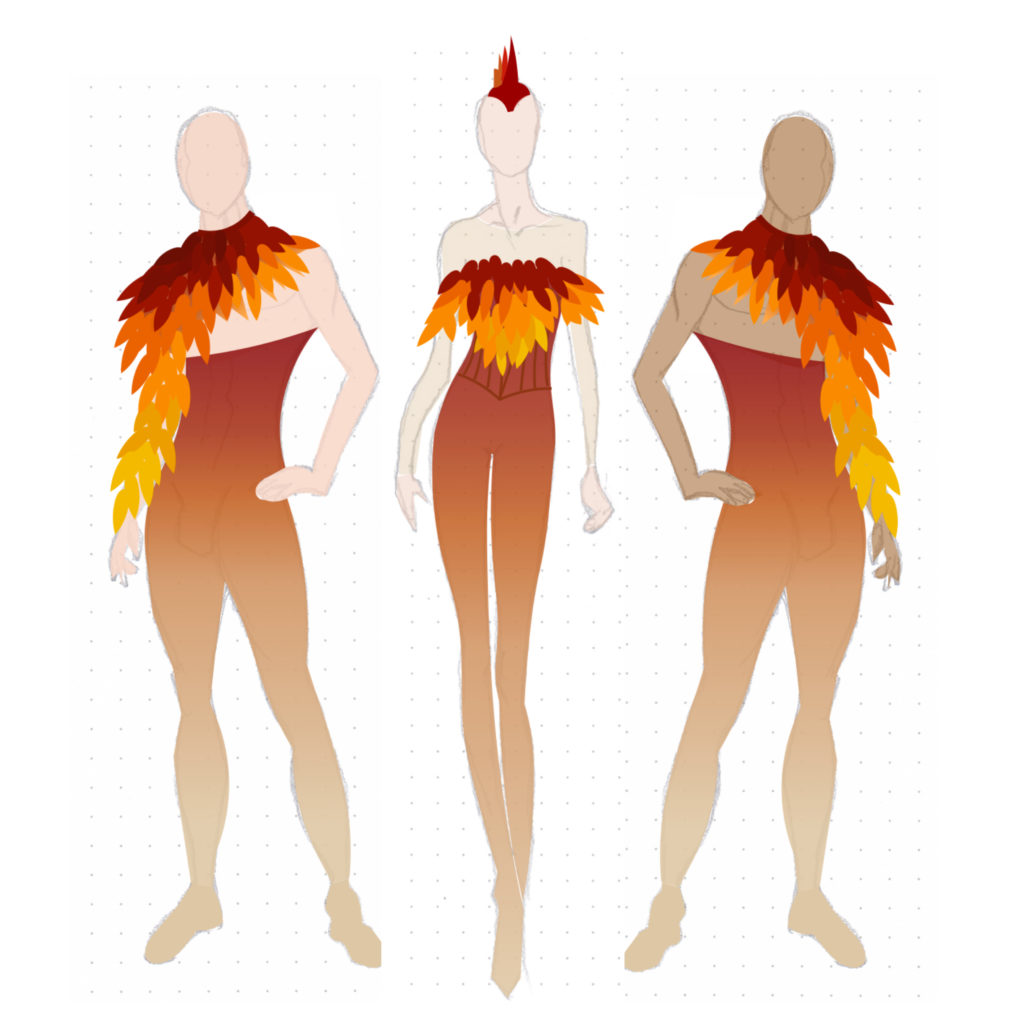 One of many major challenges Haag had to overcome in creating this production was a section featuring apples. “The Princesses Game with the Golden Apples” is a scene from the original ballet that features an important part of the music, but doesn’t necessarily move the plot forward. Haag decided to replace the apples with orbs that glowed white in the presence of Love and turned off in the presence of Fear.

“It turns out, finding glowing white orbs that don’t change color or flash is really challenging,” Haag laughed. “We tried whiskey ice molds, juggling balls, poi balls, nothing seemed to work. Then my dad found a site that produces these plastic balls that are used to indicate fluid levels in production facilities. We cut them open and put a light inside.”

Haag describes her version of The Firebird as uplifting, focusing on community and the idea of surviving and persevering with love and support.

“I read a lot of post-apocalyptic books and stories to get a feel for how characters might act in this type of world,” Haag said. “Many of the stories featured love as a major factor in survival.”

While many of the elements of this ballet are changing under Hagg’s direction, one thing remains the same, the score, played live by Orchestra Next. Requiring more than 60 musicians, it will be the biggest ensemble that Orchestra Next has ever assembled in the Hult Center pit.

“One of the challenges with Firebird is the size of the orchestra that is required—it’s huge!” said Eugene Ballet Music Director Brian McWhorter. “Also, the composition is probably the most complicated music that we’ve ever played. It’s very difficult. And it’s highly unusual for any orchestra to perform the entire piece.”

In addition to this highly-anticipated retelling of The Firebird, Eugene Ballet opens the program with Italian Suite, a ballet by well-known choreographer Gerald Arpino.

“Gerald Arpino is one of the great American ballet choreographers of the 20th century,” Pimble said. “We chose Italian Suite because of its pure, romantic nature. It’s a lyrical piece, joyous and bright. Apart from the honor of having an Arpino work performed by our company it will add variety to the program as a whole.”

Eugene Ballet’s 40th Anniversary Season is ending with what is sure to be a grand finale. Between nods to the past and innovative ideas for the future, the ballet is propelling performers and audiences into a new kind of dance experience.

In fact, as Pimble noted:

“Suzanne is taking the ballet to a new place with an apocalyptic version very much in the genre of sci-fi fiction novels and movies of today which will appeal to younger people—the audience of our future.”

Click here to purchase your tickets to this incredible performance!

Taming of the Shrew: This Weekend Only!

An Uncommon Woman To Celebrate

When visitors, students, and performers walk through the doors of the new Midtown Arts Center…