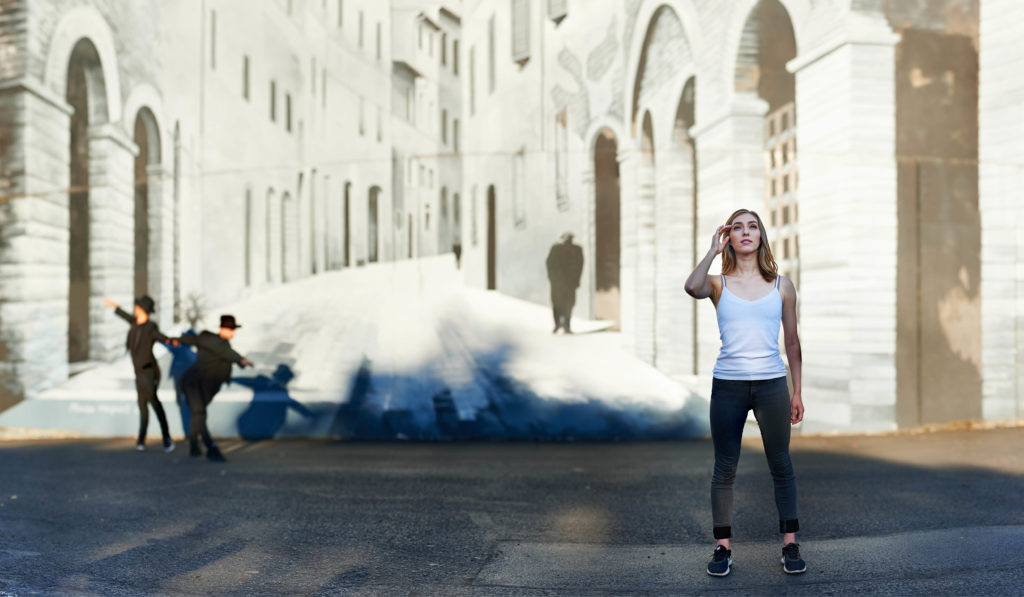 Eugene Ballet’s Artistic Director Toni Pimble returns to her heralded compilation of female choreographers’ works, Celebration of the Uncommon Woman, with an evening performance on Saturday, February 12 and a matinee performance on Sunday, February 13 at the Hult Center for the Performing Arts.

Pimble constructed the original Celebration in 1992, with works created by female choreographers and female composers, and conducted by then Eugene Symphony Music Director and Conductor Marin Alsop. “It was a challenging undertaking,” Pimble said. Thirty years later, female choreographers still strive for recognition in the dance world, particularly in ballet where the industry is overwhelmingly comprised of male directors and choreographers. 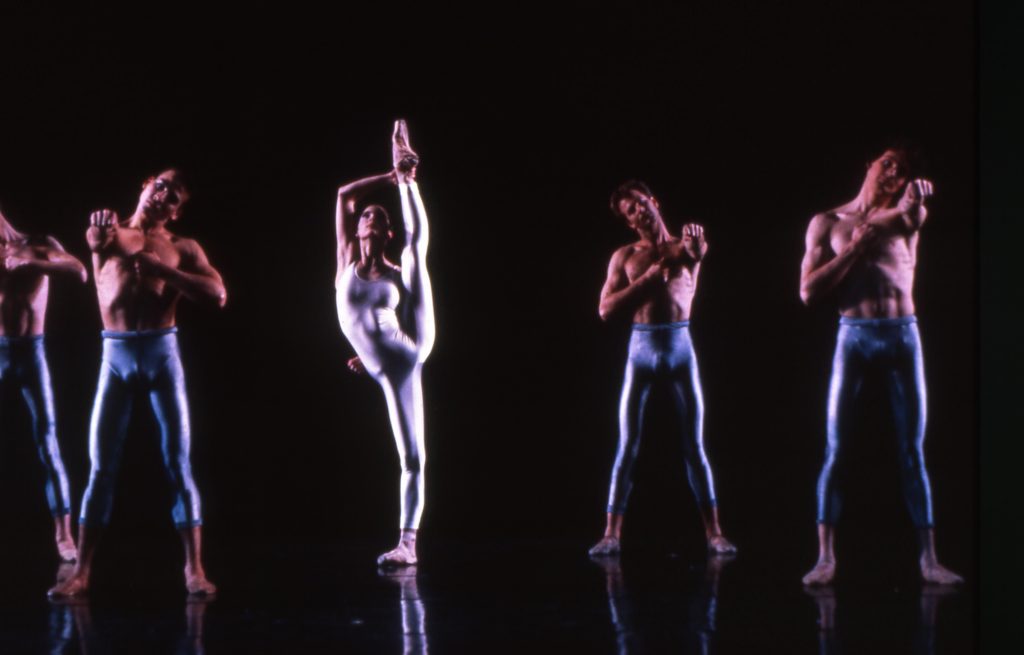 Captured Angel, by Jill Eithorne Bahr in the 1992 presentation of Celebration of the Uncommon Woman

The 2022 edition of Celebration of the Uncommon Woman includes works by Pimble, Suzanne Haag, Resident Choreographer at Eugene Ballet, and three guest choreographers: Sabrina Madison-Cannon, Phyllis and Andrew Berwick Dean and Professor of Dance at the University of Oregon School of Music and Dance; Penny Saunders, Resident Choreographer at The Grand Rapids Ballet; and Nicole Haskins, Trainee Program Director at Ballet Idaho.

Revisiting the concept of raising female choreographers’ voices in a collaborative program partially stems from Pimble’s decades as Eugene Ballet’s founder and Artistic Director. Haag explained, “Toni’s tenure at the helm is the longest directorship of a woman in the United States, something uncommon and to be very much celebrated.”

“Dance Data Project, an online resource that tracks the hopeful increase and changes in female leadership in the dance world, and specifically ballet, recently found that there were only six female resident choreographers in the entire nation. We’re proud to be able to feature two of the six on this program,” Haag said.

Haag and Pimble created a “wish list” of female choreographers going into the planning of this season’s Celebration. “We narrowed down specific pieces that would complement each other over the course of the program and give the audience a broad range of styles, as well as challenge and showcase our dancers with different ways of moving,” Haag noted. “Honestly, curating this program was difficult. There’s an incredible body of work being made right now by women. If we’d used all the pieces we loved, the program would be hours long! As always, we’ll continue to push female voices on future programs.”

Haag’s world premiere work, With Your Own Wings, is in three movements, features seven company dancers, and is set to music by Caroline Shaw and Michael Wall. The title comes from Oregon’s state motto “She flies with her own wings.” Haag’s piece explores her own experiences as a woman, what it means to be feminine, and the pressures of needing to have, to be, and do “it all.” She continued, “Though I’m not originally from Oregon, much of my adult life has taken place here and that has surely shaped who I am as a woman and how I fly.”

Pimble’s work, Concerto Grosso, set to Ernest Bloch’s Concerto Grosso No. 1 for String Orchestra and Piano Obbligato, was originally choreographed on Kansas City Ballet in 2010, and performed by Eugene Ballet last in 2012. Eugene Ballet’s Associate Artistic Director Jennifer Martin recalls this work with great affection, as she performed it in her last year as a dancer with the company. “Bloch’s music is incredible to dance to. What I remember most was the absolute excitement to be on stage performing the steps. Toni’s choreography made it possible to relate in a very personal way with this piece. Conveying those moments to the audience was an absolute pleasure…it made me thankful to be a dancer,” Martin recalled.

Madison-Cannon’s choreography has traveled the globe, performed in China, Spain, New York, Los Angeles, Dallas, Denver, and Philadelphia, with invitations to Switzerland and Italy in the works. A former soloist with the Philadelphia Dance Company, she trained at the National Academy of Arts and the Alvin Ailey American Dance Center. Her piece for the Celebration, …And Then There Were Five, has been evolving over the past six years, first set on a small regional company in Tennessee. “All of my works are somewhat based in personal narrative,” she explained. “This piece is about overcoming, supporting, and surviving—putting one foot in front of the other.”
Her work with Eugene Ballet’s dancers during the pandemic for the 2021 digital production of A Dream Within Reach “was an amazing experience.” She added, “It’s very exciting to have a program of all female voices. It will be very powerful.”

Originally from Florida, Saunders began her professional career with The American Repertory Ballet under the direction of Septime Webre, adding Ballet Arizona, MOMIX Dance Theater and Hubbard Street Dance to her resume. Her choreographic career was launched in 2011 when she won the International Commissioning Project. In 2016 she received the Princess Grace Choreographic Fellowship. Her works have been set on numerous dance organizations including Whim W’Him, BalletX, Pacific Northwest Ballet, Oklahoma City Ballet, Cincinnati Ballet, among others. Saunders’ work for the Celebration, Ghost Light, premiered in 2015, and was set on the Owen/Cox Dance Group and commissioned by Johnson County Community College’s Performing Arts Series for New Dance Partners. She describes the piece, based on a popular theatrical superstition that every theater has a ghost, as “telling the story of what happens after the audience leaves the theater and the ‘ghosts’ of former performers are left to their own devices.” Music for the work includes selections by Alexandre Desplat, Mark Mothersbaugh, and J.S. Bach.

Haskins danced professionally for 14 years with The Washington Ballet, Smuin Contemporary Ballet and The Sacramento Ballet prior to her choreographic commissions with Richmond Ballet, Oregon Ballet Theatre, Dayton Ballet, Amy Seiwert’s Imagery, and The National Choreographic Initiative, among others. Illuminations, originally created for the Choreography XX competition and performed by Oregon Ballet Theatre in 2017, is set to Benjamin Britten’s The Illuminations. Jamuna Chiarini of Oregon Artswatch described Illuminations at its premiere as “sweeping, grand, and architectural. It encompasses the attributes of classical ballet like the pointe shoe and the use of line, but goes beyond positions, allowing the limbs and energy to extend, limitless, into the space, creating a larger-than-life effect.” Haskins noted in the interview that “a lot of women in ballet don’t work with women choreographers, so they don’t really necessarily think that they could do that, or know that there would be opportunities for them,” a sentiment shared by Haag.

“I was lucky enough to be encouraged to create as a young dancer, but I know many dancers that weren’t exposed to choreography at a young age. They were given the message that girls do the dancing and men make the steps. I think this has been entrenched in some training forms. I hope programs like this one, and work like my own, can undo this thought process,” Haag explained.

Pimble added, “Now more than ever, as we see an increase in women choreographers and their work being shown, it was important to me to have this opportunity to say, yes we did this 30 years ago, and look where we are now! We have a lot more women creating, and I wanted to showcase these talents.”

Tickets are on sale now at eugeneballet.org, at the Hult Center Ticket Office, and by phone at 541-682-5000. Youth and college tickets (with valid ID) are available for $15, and adult tickets start at $25. COVID-19 protocols are followed in the Hult Center, click HERE for details.