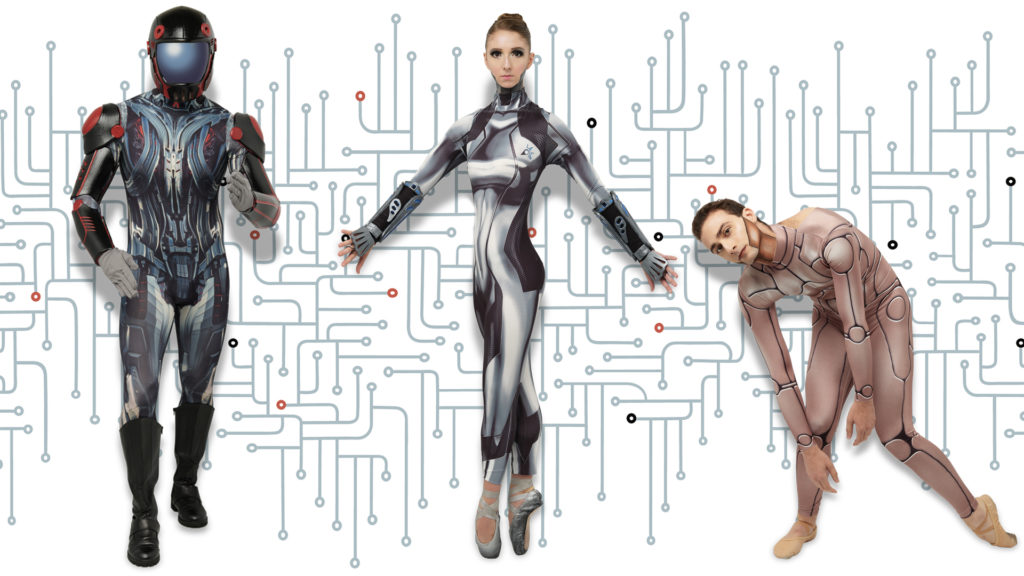 Eugene Ballet’s world premiere of Petrushka is the latest re-imagining of a ballet classic by Resident Choreographer Suzanne Haag, with Igor Stravinksy’s score played live by Orchestra Next. The Stravinsky programs—February 11 at 7:30 pm and February 12 at 2:00 pm—include Toni Pimble’s The Rite of Spring and Melissa Bobick’s Apollon Musagète. The three ballets traverse mythology, the rituals of early humans, and the not so distant future.

After Haag’s success with re-imagining Stravinsky’s The Firebird in 2019, she focused on his 1911 ballet that tells the story of love and jealousy among three puppets brought to life. Haag’s Petrushka explores identity, love, and humanity amidst artificial intelligence set in a space station trade center where AI technology is bought and sold. Far from the original—with a cacophony of color in costuming and set design—Haag’s vision is a sleek and stark environment that brings the relationships between her characters—The Builder, The Warrior, The Companion, and Petrushka—into a heightened focus. 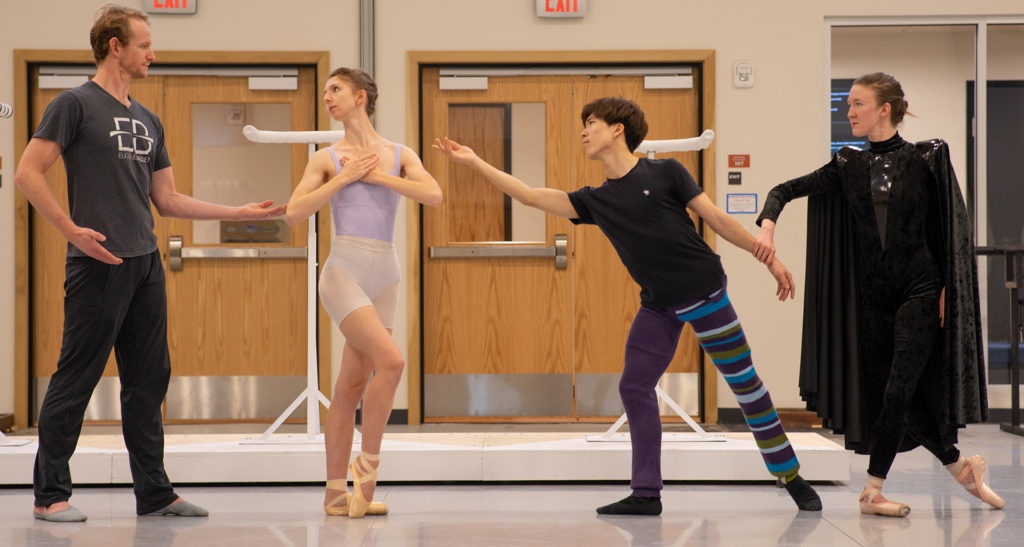 Technology Takes The Stage with Video and Costumes

Technology plays a near leading role in Haag’s choreography, with large video monitors on stage that reveal details of the characters’ histories plus a virtual reality view as the androids and humans interact. Working with videographer Katherine Frizzell, Haag and Eugene Ballet’s dancers have captured off stage scenes that imagine the characters’ feelings in the moment and offer clues to their futures. 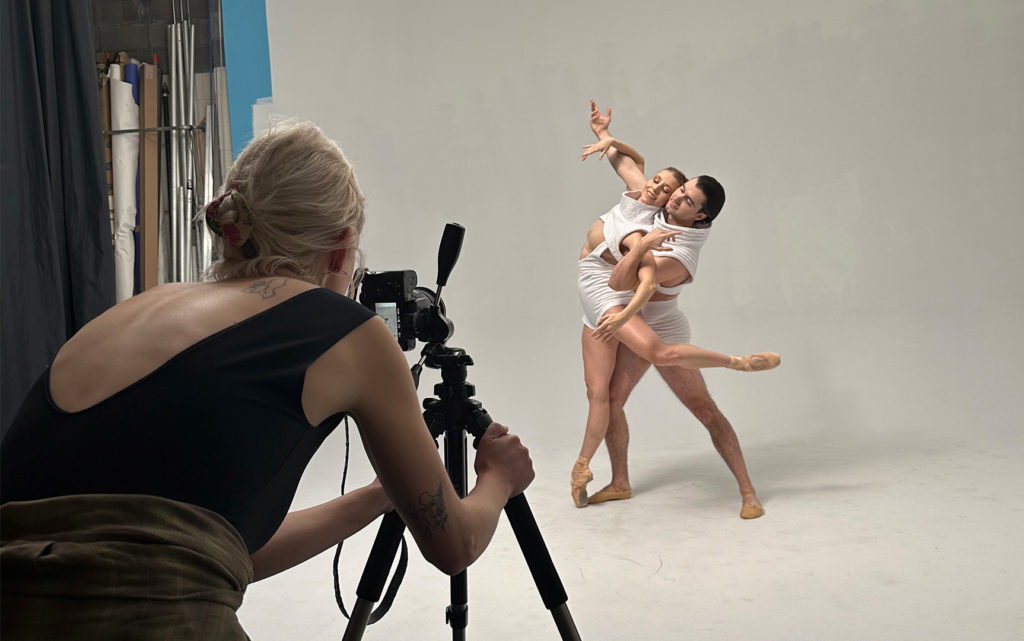 Haag’s vision for Petrushka is realized in more detail by the exciting costume designs created by Eugene Ballet Costume Shop Manager and Costume Designer Axel Dāzee. Creating her original sketches, Dāzee“got into the mind of The Builder as a product designer” and began to work with thermal reflective fabrics. Dāzee demonstrated the fabrics’ capacity to “power on” in the Costume Shop, without the use of stage lights, which elicited oohs and aahs from EB staff. She is adding crystals and other reflective bling to the android costumes, creating even more contrast with their drab, dull, and flat human counterparts, another twist in Haag’s re-imagining. 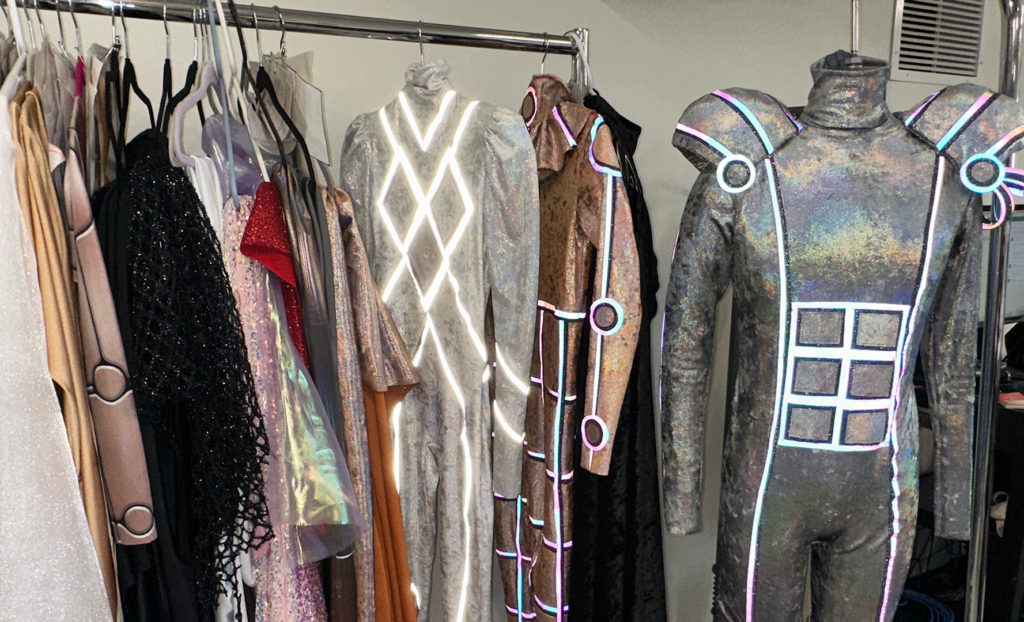 Dāzee emphasized that the collaboration with Haag and the dancers has been rewarding, even as she recalibrates costumes and headpieces to better fit the choreography. Look for icons Dāzee created for each android: “The Companion wears a heart, The Warrior has his ‘abs,’ and Petrushka has references of the harlequin puppet from the original ballet,” she explained. And what might one do with 16 inflatable legs? We’ll leave that one for audiences to discover.

A Rare Opportunity for Our Friends in The Pit

Artistic Director Toni Pimble recalled that Eugene Ballet last performed Petrushka in 1987. Her choreography of the ballet originally debuted in 1984 at the Hult Center where she danced the role of The Ballerina (now The Companion) and Eugene Ballet Co-founder Riley Grannan performed the role of The Charlatan (now The Builder). “I loved performing that role because Stravinsky’s opening music of the puppets’ dance is so fabulous,” she said. 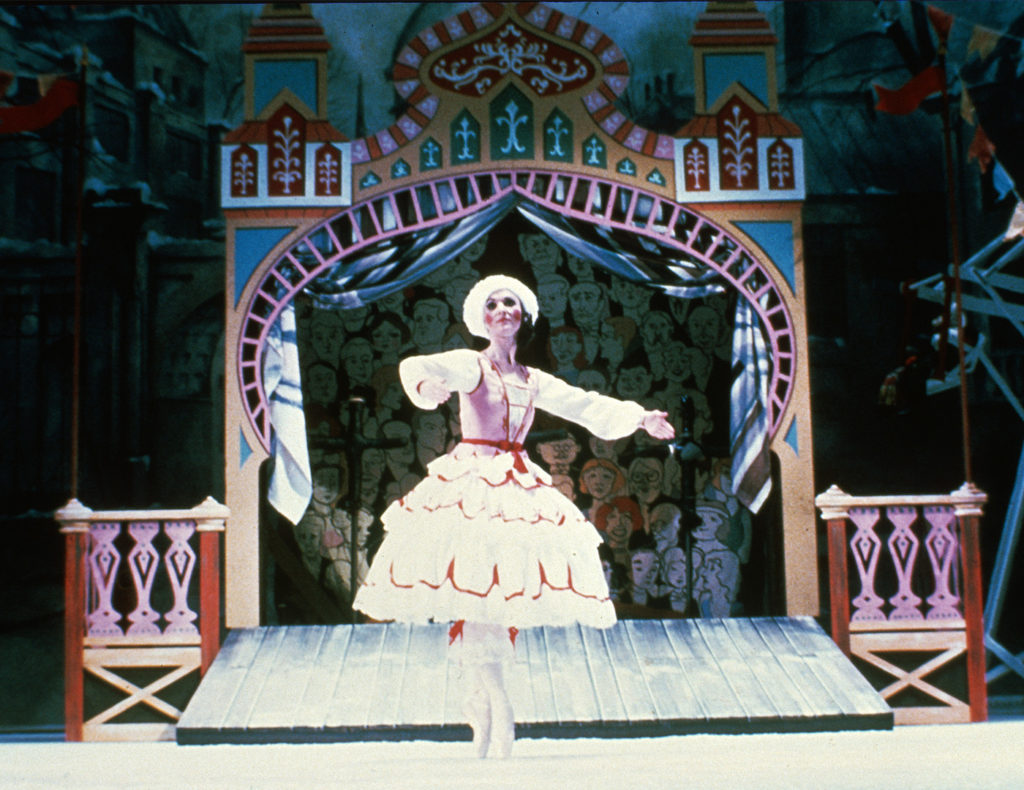 Toni Pimble as The Ballerina in 1984

Orchestra Next, performing the 1947 version of Stravinksy’s poignant and imposing score, also plays a leading role in these performances. “The musical themes that Stravinsky wrote specifically for the character Petrushka are heartbreaking, as he examines the awareness that he is not human, but feels human emotions,” Haag noted. This is first time Eugene Ballet has performed Petrushka with a live orchestra, and Conductor Brian McWhorter added that it is “a rare opportunity for Orchestra Next’s student and professional musicians.”

Orchestra Next in the Silva Concert Hall, photo by Ari Denison

“Petrushka is one of the most important orchestral works of all time. Composed more than a century ago, it remains a piece that musicians eagerly want to play because it’s so unusual and thrilling,” McWhorter remarked. Though McWhorter loves a challenge, Haag’s futuristic recasting has made the task even more intense. “This piece is hard enough on its own, but with a world premiere production like this, on a scale of 1 to 10, all the musicians’ concentration has to be at a 10. For the premiere, we have to be at an 11! Thankfully, Orchestra Next is accustomed to playing at 11,” he said.

Before the performance, take a moment to listen to Stravinksy’s Petrushka HERE.

Premiered in 2002 and last seen by Eugene audiences in 2012, Pimble’s The Rite of Spring, like the original, is a controversial work. “Since its inauspicious debut [choreographed by Vaslav Nijinsky and performed in Paris 1913 to a near riot], ballet companies all over the world have presented many different versions,” Pimble explained. “I envisioned this work as taking place in a prehistoric era in which the dancers are at their most fundamental. The movement vocabulary is contemporary and earthy.” Reviewer Gwen Curran noted, “The Hult Center’s Silva Concert Hall stage sizzled… with the earthy tension of Toni Pimble’s Rite of Spring… Jennifer Martin was brilliant as ‘The Chosen One’… There is no doubt that this dance company brilliantly performs in the modern dance mode.” (April 17, 2012, The Register-Guard) 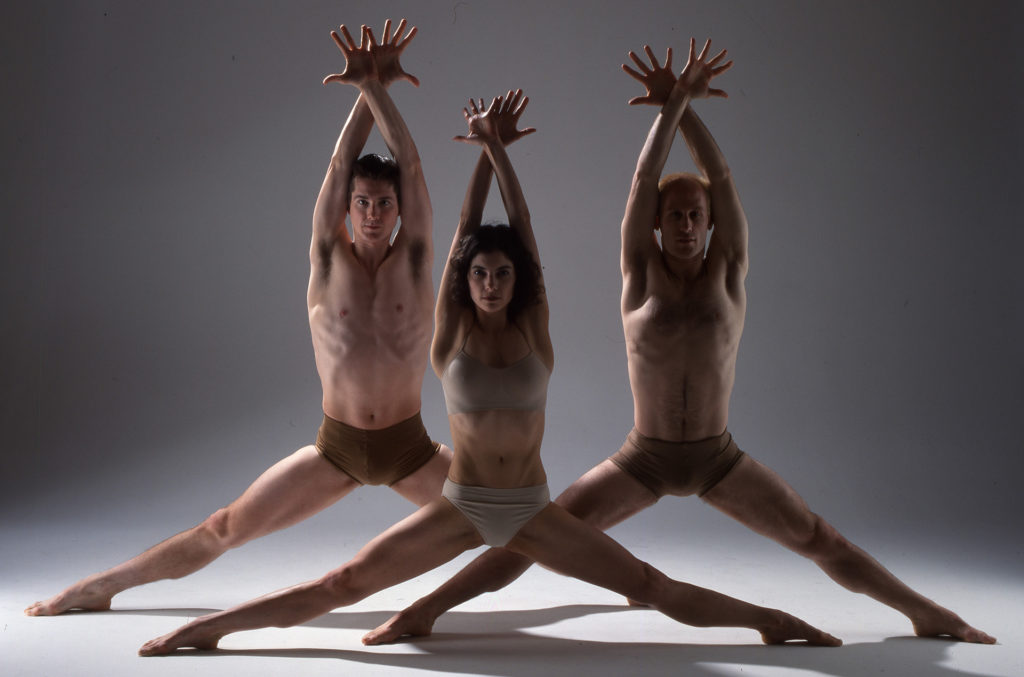 Associate Artistic Director Jennifer Martin recalled: “Toni was originally thinking of casting an alternate female for ‘The Chosen One’ when the work was created in 2002. When she began choreographing, I was incredibly drawn to the movement and message and was very determined to achieve what she was looking for. The score is quite difficult, so it was challenging from an analytical sense. The movement is dynamic and requires full range from head to toe, so also challenging from a physical sense. The storyline is a journey to an unhappy and violent end and requires a dramatic commitment to convey the absolute horror of the situation to the audience, thus, challenging from an emotional sense. Toni’s work should leave the observer feeling uncomfortable. It serves as a visual reminder of both beauty and brutality.” 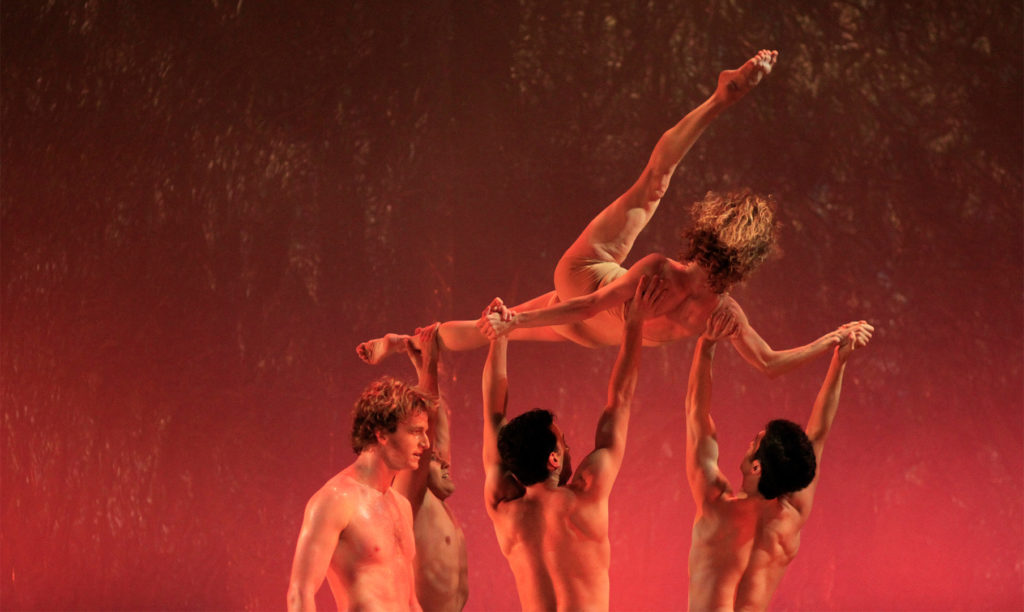 Jennifer Martin in The Rite of Spring, 2012

Read more about the impact of the original ballet and its music HERE.

Self-Discovery and the Young Mythological God

Bobick, currently Assistant Professor and Director of the Utah Ballet Choreographic Institute at the University of Utah School of Dance, was commissioned by Eugene Ballet to set Stravinksy’s Apollon Musagète on four dancers in the 2011/12 season. This season’s cast features Principal Dancer Koki Yamaguchi as Apollo, and his Muses danced by Principal Dancer Koatsu Yashima, and Company Dancers Nina Nicotera and Hayley Tavonatti. This classical work continues the theme of self-discovery with the young Apollo, the changing relationships with his Muses, and his destiny as an eternal god. “It is this journey of self-discovery that makes Stravinsky’s Apollon Musagète a timeless work that continues to speak to all of us,” Bobick noted. 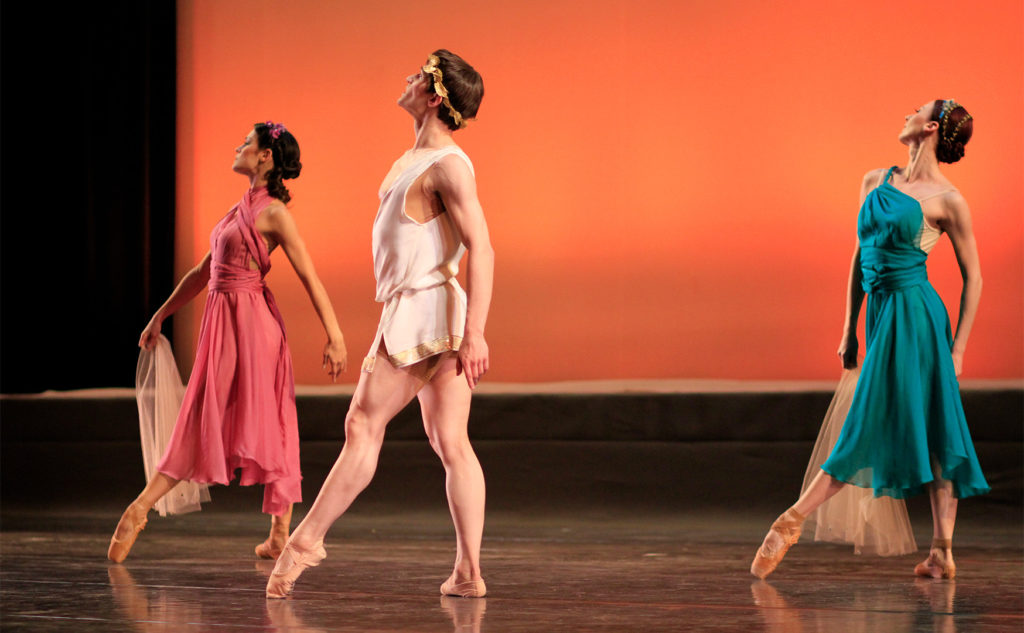 Due to mature themes & subject matter, Eugene Ballet recommends this show to ages 11+. For any questions about this show or future recommendations, please reach out to [email protected]

With The Nutcracker opening this weekend, we’re taking a closer look at the journey of…