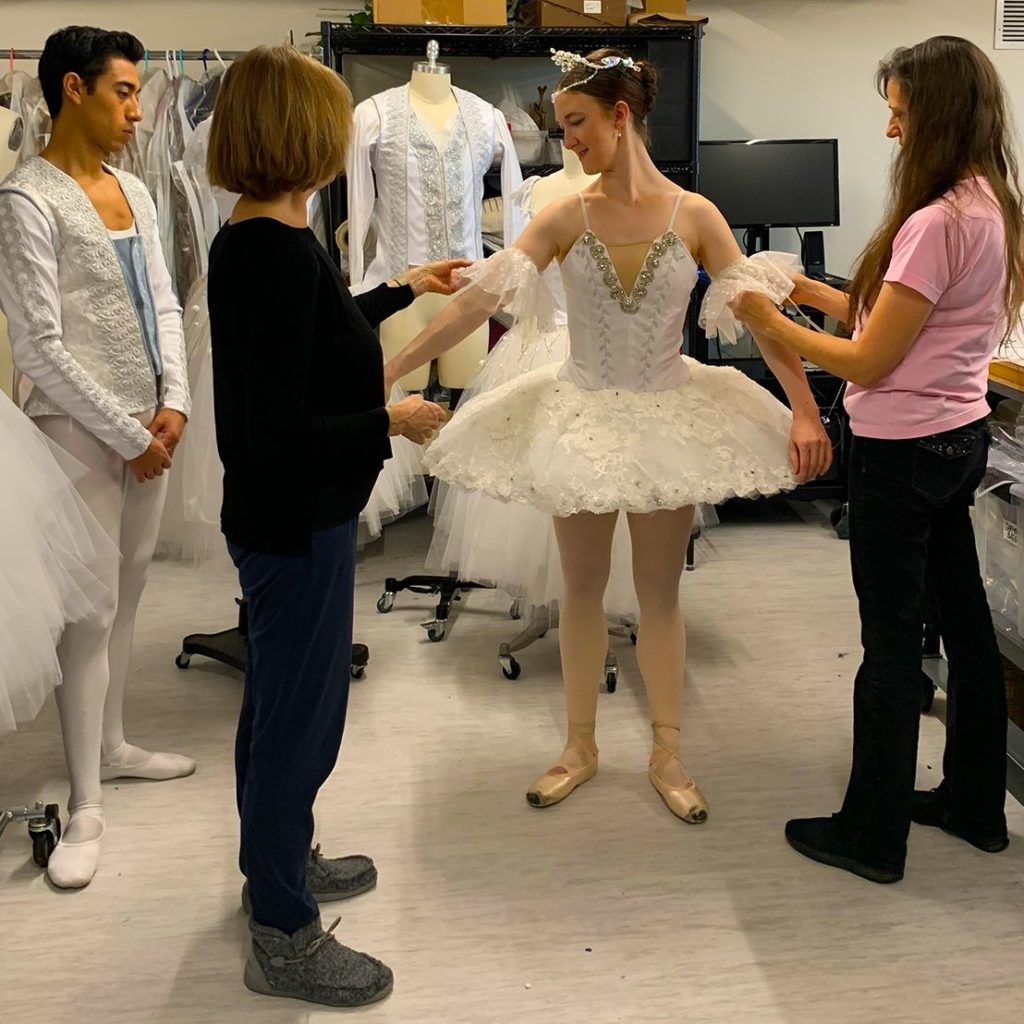 The holiday spirit is strong in the studios at the Midtown Arts Center. Eugene Ballet dancers are hard at work rehearsing for seven—two matinees and five evening—performances of Artistic Director Toni Pimble’s The Nutcracker with Orchestra Next at the Hult Center. We’re here to gift you some shiny details on what you’ll see on stage.

Herr Drosselmeyer, The Nutcracker’s magical toy maker, whispered just one word in our ear: SNOW! “The new Winter Land will be glistening with dancing Snowflakes, and a shimmering Snow Queen and Snow King,” he excitedly explained. Winking his unpatched eye, he mused, “All across the land, many Nutcracker ballets have beautiful Snowflakes delighting young Hans and Clara. I wonder how our Nutcracker came to have Skaters instead? Let’s ask Ms. Pimble!”

“Thinking I was a rebel at the time,” Pimble noted, “I created the Skaters scene in 1981, our first performance of The Nutcracker on the South Eugene High School stage. Later, I discovered that there already was a similar version in 1910.”

Before last December’s heartbreaking cancellation of our Hult Center and touring Nutcracker shows, Pimble had been reworking the ballet’s scenes, adapting to COVID-19 protocols, fewer company dancers, and no student dancers. “We were trying to get ready last year, having to do a very pared down version,” she explained. “Almost 40 years laters, when we realized we couldn’t have all the dancers on stage, I decided to become as traditional as everyone else and created my Snowflakes version, with a Snow Queen and Snow King.”

Bring All The Bling

The Mouse King tip-toed by, pointing upstairs to the Costume Shop, and squeaked, “That’s where they keep all the bling!” Company dancers Sara Stockwell and Antonio Lopez had just arrived for their Snow Queen and Snow King costume fittings with Wardrobe Coordinator Shaunna Durham. Associate Artistic Director Jennifer Martin and Pimble surrounded the regal pair as they checked everything twice, pinning and snipping away. We had been informed by Drosselmeyer that “the new costumes were indeed designed and built by Ms. Pimble herself!”

Pimble explained, “I don’t only create new ballets, I also create costumes. Designing and sewing the costumes for our Snowflakes scene last December helped to keep my sights on bringing us all back to the Hult Center in 2021.” Pimble’s Snowflake costumes include classic romantic style tutus incorporating a beautiful gold filigree overlay fabric with tiny snowballs and brilliant jewels.

With eight company dancers, eight Academy dancers, and three casts of Snow Queens and Snow Kings, there is no shortage of sparkle and glimmer—from head to toe—in the Winter Land. Continuing our efforts to keep our dancers, staff, and crew safe during the pandemic, a third cast was added after Nutcracker rehearsals had begun. More tutus! More tunics! More tiaras! The bling was getting harder to find. Drosselmeyer hinted that “Ms. Martin has a tale to tell there.” 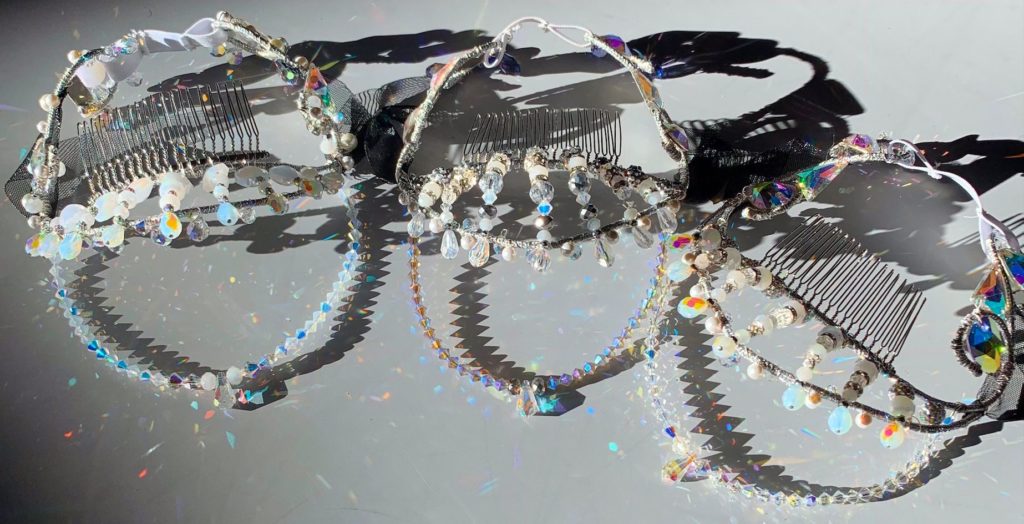 Too too many tiaras! Will the Sugar Plum Fairy’s tiara sparkle more than the Snow Queen’s?

Who Wears It Shinier?

Just then, the Sugar Plum Fairy appeared with a mischievous grin and a challenge: “We’ll let the audience decide whose tiara has the most shimmer. Mine or the Snow Queen’s!” No small feat for any fan, as there are too too many tiaras. Before the beloved Fairy winged away, she added, “Ms. Martin makes our bejeweled headpieces, and has for many seasons.”

“Yes, I have the pleasure of building headpieces,” Martin said. “There are two different tiara sets for the Snowflakes, one for the student dancers and one for the company dancers with giant crystals on the sides that make their heads almost look like disco balls,” she continued. “They are very sparkly!” As each costume that Pimble makes is a variation on a theme, Martin creates her headpieces with individual flair. Each Snow Queen tiara is constructed using a different set of gems: one with aurora borealis crystals, one with more silver bling, and the third with milky white glass beading.

The Sound of Snow

Clara bumped right into us as we made our way back to the rehearsal studios. “It’s no secret that there will be snow falling on us in the new Winter Land,” she remarked winking, “but don’t tell Fritz. Ask Maestro McWhorter if he thinks the orchestra will be excited by the new Snowflakes.”

Orchestra Next Co-Founder and Conductor Brian McWhorter has more than a few reasons to be excited about this season’s Nutcracker performances: the organization’s 10 year anniversary and The Nutcracker recording project are just two. “The Nutcracker is in Orchestra Next’s DNA. It began the whole journey for us in 2012. I can’t believe it’s been 10 years,” he exclaimed. But will the music change with Snowflakes? “I can’t wait to see what they look like,” he said. “With new dancers and new choreography, it’s a dynamic process at each show to begin with, so that will definitely make us play a little differently.”

“We’re really sorry to not have the youth choir with us for the Winter Land scene due to the pandemic,” McWhorter added. “Instead, I’ll just be humming as loud as I can.” Keep an ear open to hear if that does indeed happen as you enjoy Eugene Ballet’s new Snowflakes scene—a beautiful pas de deux from the Snow Queen and Snow King, and 16 Snowflakes creating a wondrous vision of snow falling. “It’s been fun to choreograph a snow scene with Snowflakes after such a long time of being a rebel,” Pimble concluded. “It’s a very pretty scene, like the icing on the cake.” 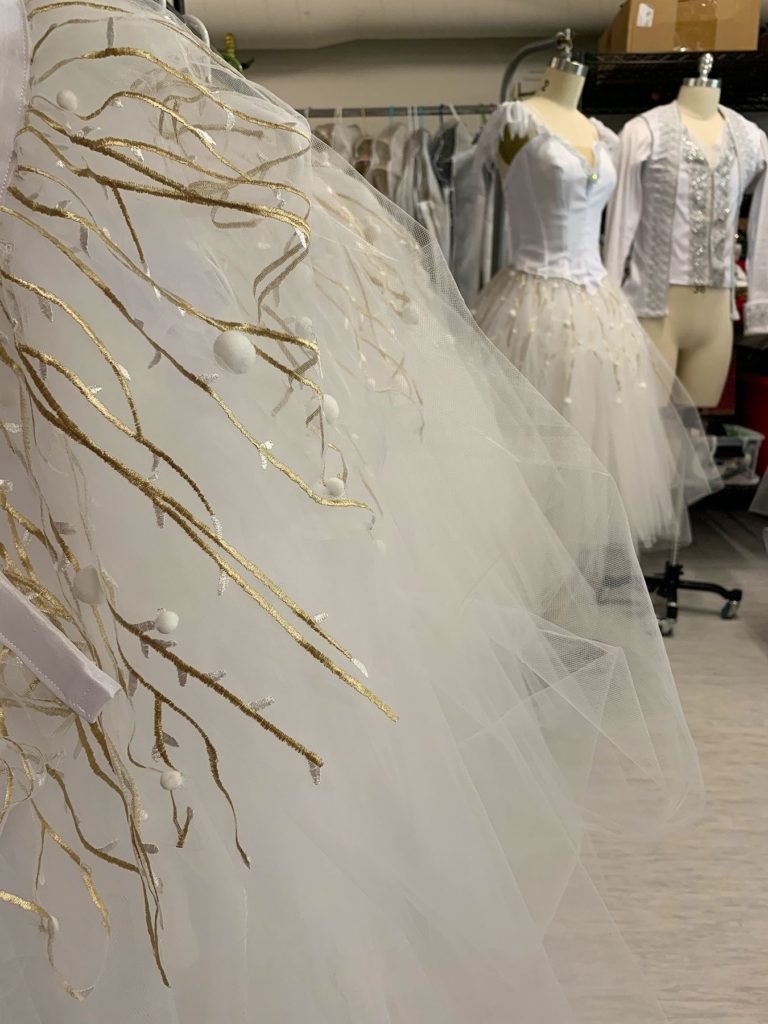