Instagram. Instant gratification. Instantly. What do you think of when you read these words and phrases? What do you see when you add in ballet? Do you see a choreographer or artistic director driving the work? Or do you see an audience collaborating with dancers to create a one-of-a-kind ballet? If you envisioned the latter, then you’re seeing Eugene’s audience interactive dance company #instaballet.

We reached out to #instaballet founding directors Suzanne Haag (Eugene Ballet Resident Choreographer) and Antonio Anacan (former Eugene Ballet company dancer) to find out what inspired them to create #instaballet, their process for creating a ballet, and how Eugene Ballet supports their work.

“We (Antonio Anacan and I),” Suzanne explained, “were actually sitting in Brail’s Espresso at the end of the Eugene Ballet season with a few other dancers wondering how we could keep dancing during the ballet off-season which spans from May to September. And we started brainstorming small events we could do, like having rehearsals that people could come in and watch or showing short pieces in the studio instead of onstage. These ideas weren’t particularly unique, but they were a way to keep us dancing and sharing our art.

“At the same time we also noticed that EVERYONE was sharing images with each other on their phones, using social media to share art and ideas in real time. We wondered if we could do something similar with ballet—share a ballet AS its being made, instantly. But we didn’t want to take away the live component of the performing arts by creating a project for social media (my have times changed!).

“We eventually, after much discussion, landed on a combination of all these ideas: an open rehearsal where the audience plays a key role in what they are going to see. We decided to ask the audience for suggestions based on a unifying theme—we would supply dancers, music, the theme, and a few phrases of choreography for the audience to manipulate, but the audience would select where the dance would go and how.”

In describing the process for creating a ballet with audience participation, they noted that “our shows are very casual and interactive. During the course of a two-and-a-half hour ArtWalk, the audience can come and go whenever they’d like or stay for the whole show! We always perform the audience created piece at the end of the evening so folks can come back and see the final work. 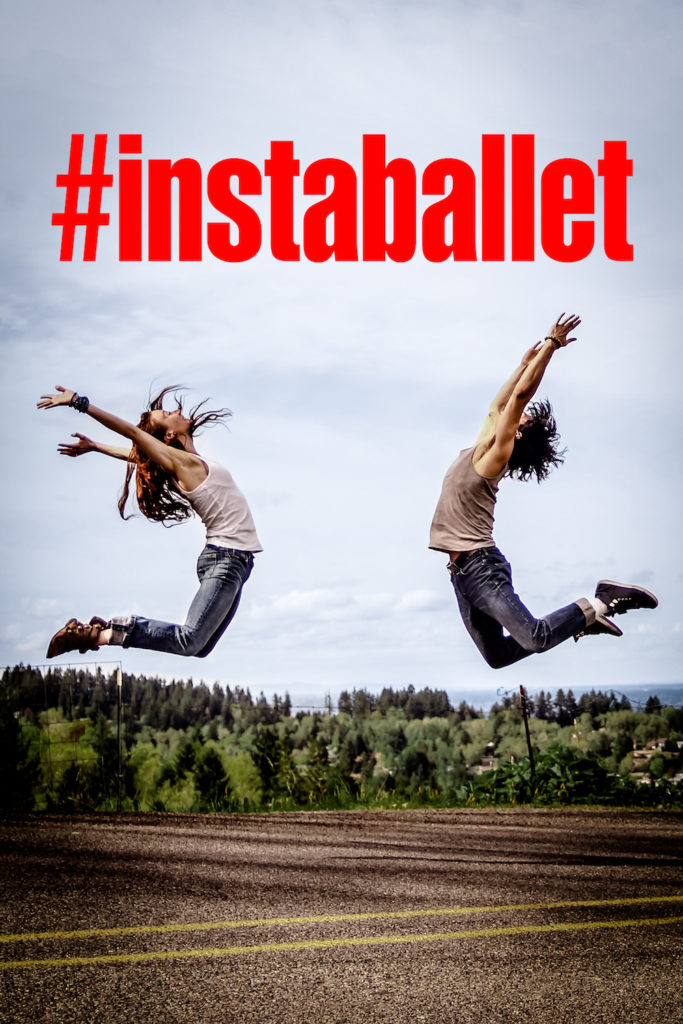 “#instaballet provides music, a theme, two to five dancers, a beginning to the piece (about 30 seconds of choreography), a few phrases and a Facilitator. The Facilitator is key in hosting the event and helping to translate the ideas from the audience to the dancers. They keep the event moving smoothly, make sure all the ideas in the room are heard, and check on the dancers to make sure they are feeling comfortable with the pace of the ballet. We also provide a few prompts to help if the audience is stuck (which rarely happens!) like the Wheel of Dance—a giant wheel that can be spun for ideas and some pre-made phrases of choreography that can be used.”

Since #instaballet’s first performance in May 2013, during a First Friday ArtWalk, the response received from the community has been very positive. As Suzanne pointed out “…our work connects the audience

And an indicator of how impactful #instaballet’s connection is with their audience, Suzanne and Antonio shared a story of how the husband of one of their dancers said to them, “You know, I’ve watched dance for so long and I’ve always enjoyed it, but now I GET it!” Both went on to say, “We realized that in inviting the audience to create, they were taking ownership of the art form, understanding how a dance is made and it was giving audience members a deeper understanding and appreciation for the art form. We were definitely on to something!”

On to something indeed, as Suzanne added, “I know that #instaballet gives a greater sense of ownership to the audience, since it is their thoughts and ideas that shape all of the work we do. When we bring back a favorite piece for our annual gala, heART in Motion*, people can say ‘that was my idea! I made that.’ “

In circling back to the creation of #instaballet, we asked to describe their relationship with Eugene Ballet as, currently, Suzanne is Resident Choreographer and Antonio is a former company dancer. “Our relationship with Eugene Ballet is very close,” they said, going on to explain that when they had the idea to create an interactive dance event in the off season, they met with Riley Grannan (then Executive Director, founding director of Eugene Ballet) and Josh Neckels (current Executive Director and Eugene Ballet’s company manager at the time) to see if it was possible.

Riley and Josh were fully on board to make the event happen. And they quote Riley as saying, “I’ll bring the wine!” Suzanne and Antonio then turned their idea into a more casual event, as Suzanne put it, “a party where people could watch dance and create.” Since the initial event, #instaballet has worked closely with Eugene Ballet and has received support from the company in such forms as access to rehearsal space, borrowing dance floors, and answering endless questions about running a dance company. Suzanne did clarify that though they are separate entities, they see their relationship as symbiotic in that they provide work for dancers in the off season and keep the community interested in ballet when there aren’t any big shows going on. And that #instaballet also provides an inside look into ballet and choreography.

#instaballet has grown over the years and will be one of the eight arts organizations residing in the new Midtown Arts Center at 16th Avenue and Pearl Street. What opportunities do Suzanne and Antonio foresee? “We cannot wait to be a part of the new Midtown Arts Center. Currently we run #instaballet out of our apartments and a PO Box. Having a space in the new arts center will give us an official home, and allow us to work alongside so many other wonderful arts organizations that will hopefully lead to future collaboration.” And they added, “We are so thankful [for] the support of the Faye and Lucille Stewart Foundation in sponsoring us to be a part of the center. Without their support we wouldn’t have been able to take this next leap in moving #instaballet forward.”

As they look forward to this new opportunity, we touched on how they’re adapting to performing during a pandemic and the current vision of #instaballet. “We have had to adjust quite a bit like all of the performing arts. Luckily, part of our mission is to update the way ballet is presented, so that’s what we are doing always and now more than ever.” They continued, “Our vision remains steadfast in wanting to make ballet and creativity accessible to our community. We had been doing this by ensuring that our performances were free to the public. During this time, there is actually an increased level of accessibility as we are able to reach a broader audience online (a silver lining to the pandemic).” 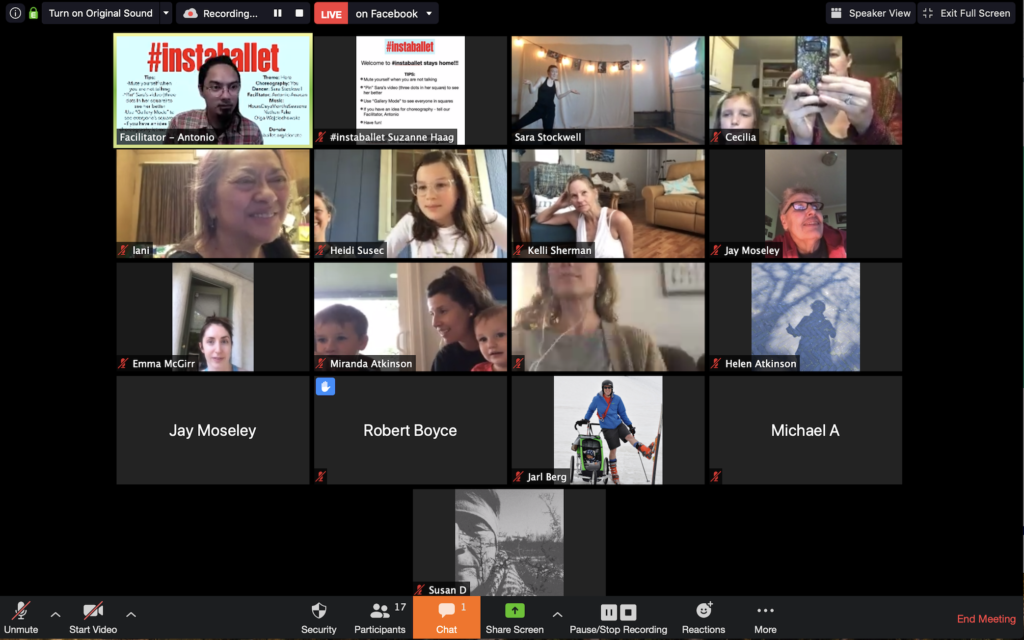 How has #instaballet has impacted their lives? “Forming #instaballet definitely gave me a greater perspective as a dancer. When performing, you are constantly focused on your own body, or the piece that you are working on. Being in charge of scheduling events, establishing a board, staying on top of our finances, writing grants and raising funds as well as dancing and choreographing has deepened my appreciation for all that goes into an arts organization. As a choreographer for Eugene Ballet, my work with #instaballet has deepened my own creative process,” Suzanne said.

“I think that creating #instaballet will always be one of my most treasured works of art, even if it isn’t my own choreography. It has allowed me to connect to the audience in such a special way and I carry this with me when making new ballets of my own,” Suzanne concluded.

* For more information about #istaballet’s upcoming gala, heART in Motion, go to https://instaballet.org/events