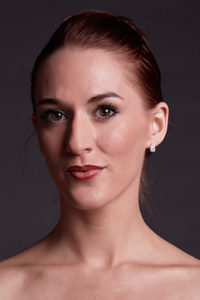 Beth hails from Florida where she trained at Pofahl Studio and graduated from The HARID Conservatory as a recipient of the Rudolf Nureyev Education Fellowship. As a Principal with Dance Alive National Ballet, she toured to Brazil, performed for HSH Prince Albert II of Monaco, and finished in the top 12 of the Senior Women category at the 2012 Varna International Ballet Competition in Bulgaria. Since joining EBC in 2013, some of her favorite roles have included Moyna and Peasant Pas in Giselle, Princess Florine in The Sleeping Beauty, Clara in The Nutcracker, and Tinkerbell in Bruce Steivel’s Peter Pan. She has originated roles in Pimble’s ballets as Stepsister Clarinda in Cinderella and Jordan Baker in The Great Gatsby. Beth had the pleasure of performing new works by Tom Gold and Stephanie Martinez at the 2016 National Choreographers Initiative. As a member of Amy Seiwert’s Imagery in San Francisco for SKETCH 6, she was featured in premieres by Amy Seiwert, Nicole Haskins and Val Caniparoli.

It takes more than just dancers to have a great ballet company.
Help support our mission to inspire our community through the creative arts.
Ways to Support
Copyright © 2021 Eugene Ballet Company. All rights reserved. Website developed by Partnered Solutions IT | Designed by Ruby Porter Marketing & Design
Back To Top